The Golden State Warriors have become one of the most popular teams in the NBA the past three seasons. And if you think the Warriors’ fans are limited to the stands, think again.

Midway through the third quarter of the Warriors’ game against the New Orleans Pelicans on Tuesday, Steph Curry knocked down a spinning jumper in Jrue Holiday’s face just inside the 3-point line.

It was the kind of shot that drew cheers from the New Orleans crowd. The shot was so good that Pelicans assistant coach Darren Erman even acknowledged it, giving the two-time reigning MVP a quick high-five. (You can see it occur at the seven-second mark.) 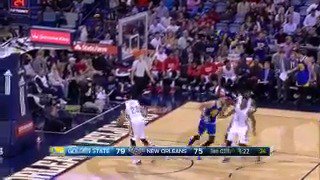 So what was Erman thinking congratulating an opponent after a made shot? Well, just like Pelicans head coach Alvin Gentry, Erman was a former coach on the Warriors staff. So there’s some history between Erman and Curry.

Kanye West Explained Why He Met With Donald Trump